Just to let you know, this website uses cookies. We have to use necessary cookies which ensure our website functions properly. We use functionality, performance, and targeting cookies to improve our services, as well as personalise your visit where you have given us permission to do so. To continue to use the website and all functionality, click ‘Yes, that’s fine’ to proceed. 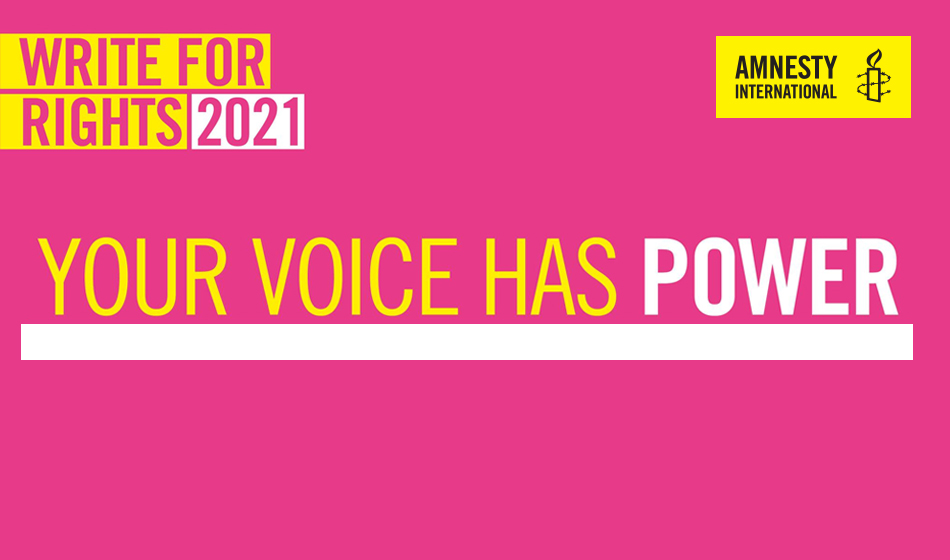 How your words can help Amnesty change the world

We are proud to announce we’ll be supporting Amnesty International’s Write for Rights campaign again this year; offering comfort, support, and solidarity to people around the globe who may need it most.

Since 2019, our colleagues and customers have contributed over 10,000 letters to support people and organizations who are enduring human rights abuses across the world.

The overwhelming success of Amnesty’s previous Write for Rights campaigns show how your messages of solidarity, alongside fellow Amnesty supporters from around the world, offer support and reassurance to people carrying out difficult and often dangerous work, in order to stand-up for the human rights of others. Whether your words reach an LGBTI organisation suffering homophobic attacks, or a lawyer facing jail for his work for human rights, these messages of support have such a great impact on those that receive them.

How you can get involved

Although it only takes a few minutes to send a letter or sign a petition— your words are powerful. And your actions can really make a difference to someone’s life; applying pressure onto the authorities to take action to help people facing torture, harassment, or unjust imprisonment.

Read about the four activists we’re supporting this year through Amnesty’s Write for Rights campaign, and find out how you can show your support for them and their causes.

Whether you choose to write for the rights of just one or all of the people highlighted, we’d like to thank you for joining us in this important campaign.

Read about the causes were supporting

Since 2006, Sphere has been championing LGBTI and women’s rights; providing a safe space for people in the city of Kharkiv, in the Ukraine. With more anti-LGBTI groups than ever emerging across the country, Sphere has been the target of many discriminatory attacks – an issue that the government is failing to address. In 2019, Sphere organised Kharkiv’s first Pride; an event that was attended by 3,000 people, yet the police failed to protect the marchers from abuse and violence. Leaving them in a permanent state of fear.

A human rights lawyer in Egypt called Mohamed Baker is head of the Adalah Centre for Rights and Freedoms which supports human rights and those who have been jailed unjustly. In 2019, he was arrested and falsely accused of terrorism, denied a trial, and locked in a cell, because the authorities opposed his human rights work. In prison, he has suffered severely cruel treatment and wasn’t even allowed to see his dying father. Despite this mistreatment, Mohamed still has hope that his work to establish free societies will continue.

At just 15 years old, Janna is the world’s youngest press-card carrying journalist - and she faces harassment and death threats daily. Living as a Palestinian in the Israeli-occupied West Bank, Janna has seen many atrocities, including the murder of her uncle when she was just seven, night raids, and the demolition of local homes and schools. In spite of this on-going harassment, Janna refuses to give up reporting the truth of her situation, saying, “I want to know what freedom means in my homeland; what justice and peace and equality means without facing systematic racism”.

In October 2020, Imoleayo, alongside many other young people, took to the Nigerian streets to protest against violence, extortion, and killings by the Special Anti-Robbery Squad (SARS). Imoleayo, a computer programmer, who used his skills to promote the protests on social media, had his housed raided by 20 armed men, who destroyed his home and arrested him. After two months of imprisonment, enduring inhumane treatment, he was released— but now faces disproportionate charges to further his sentence.

Not found what you're looking for?

Visit a branch
Call us